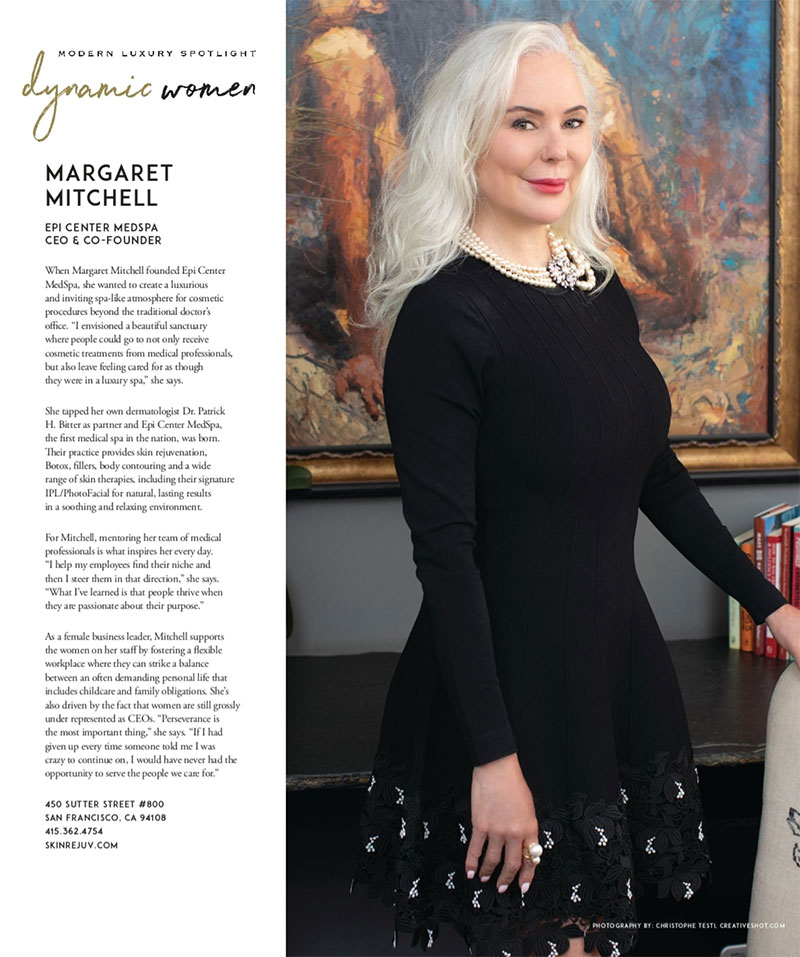 When Margaret Mitchell founded Epi Center MedSpa, she wanted to create a luxurious and inviting spa-like atmosphere for cosmetic procedures beyond the traditional doctor’s office. “I envisioned a beautiful sanctuary where people could go to not only receive cosmetic treatments from medical professionals, but also leave feeling cared for as though they were in a luxury spa,” she says.

She tapped her own dermatologist Dr. Patrick H. Bitter as partner and Epi Center MedSpa, the first medical spa in the nation, was born. Their practice provides skin rejuvenation, Botox, fillers, body contouring and a wide range of skin therapies, including their signature IPL/PhotoFacial for natural, lasting results in a soothing and relaxing environment.

For Mitchell, mentoring her team of medical professionals is what inspires her every day. “I help my employees find their niche and then I steer the in that direction,” she says. “What I’ve learned is that people thrive when they are passionate about their purpose.”

As a female business leader, Mitchell supports the women on her staff by fostering a flexible workplace where they can strike a balance between an often demanding personal life that includes childcare and family obligations. She’s also driven by the fact that women are still grossly under represented as CEOs. “Perseverance is the most important thing,” she says. “If I had given up every time someone told me I was crazy to continue on, I would have never had the opportunity to serve the people we care for.” 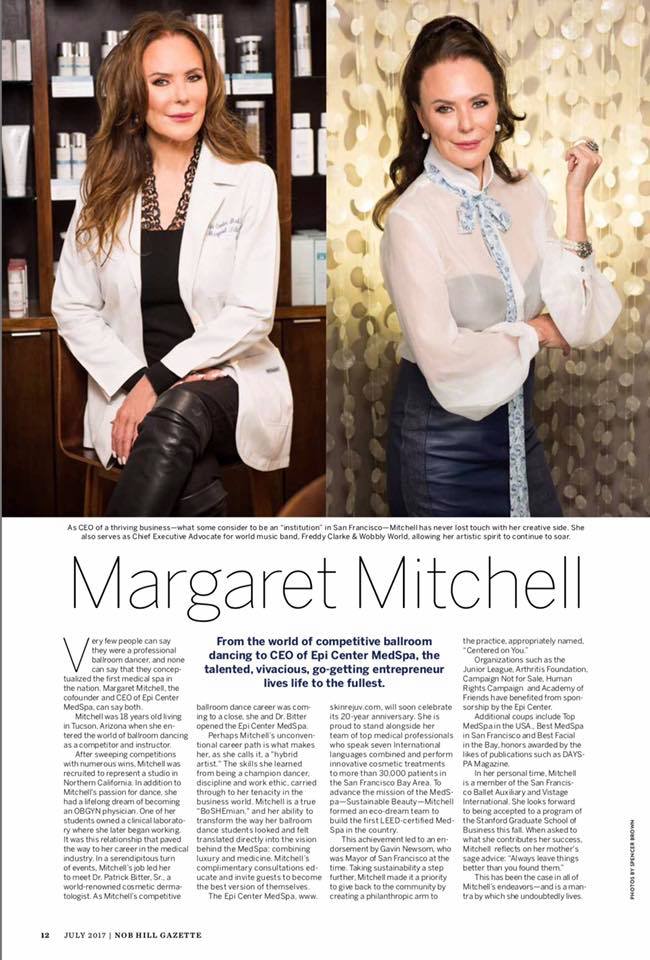 Congratulations to our #IndependantWoman CEO/Founder of the The Epi Center MedSpa, Margaret Mitchell for being featured in the July 2017 “Independent Women” issue of the Nob Hill Gazette. Kudos for being an inspiration to women and men around the world with your triumphant story. We applaud you for opening the first medical spa in the nation nearly 20 years ago! In the classic words of Destiny’s Child “All the women who are independent… throw your hands up at me!” #HappyIndependenceDay

Thank you for voting us Top 5 Day Spa!

The Best Services of San Francisco

Former 7×7 executive editor Robin Rinaldi has been hanging around our masthead since 2005. In that time, Rinaldi has become a woman about town and a trusted resource for all things San Francisco. Here she culls a list of 58 miscellaneous “bests” about town, including a few of her own favorites and picks from our staff editors. An SF resident for nine years, Rinaldi is also writing a memoir.

SAN FRANCISCO, July 7 /PRNewswire/ — San Francisco’s own Epi Center MedSpa has been selected as the Bay Area’s “Best Day Spa” in the 2010 Best of the BayList Awards, securing its place as a San Francisco institution and Bay Area favorite. Recently recognized as one of only thirteen facilities nationwide to be included in the 2010 DaySpa Top Honors, the LEED® Certified facility continues to offer the best in skincare services since its opening twelve years ago.

The BayList awards on SFGate.com received over 70,000 votes from members of the Bay Area community, with Epi Center MedSpa leading the two-month long contest and eventually securing the top spot. The spa’s commitment to medical-grade skin rejuvenation and eco-friendly practices has propelled the facility as an industry leader and launched it into the national spotlight with strong interest in its medical therapies and organic treatments. In their review of the best spas in the nation, DaySpa Magazine editors recently named Epi Center MedSpa the “Top Medical Spa of 2010”.

“Epi Center MedSpa stood out amongst the competition because it showcases the best of clinical and environmental practices,” says Rhonda Wilson, Executive Editor of DAYSPA Magazine. “Their business model is a good example of where the industry is headed.”

“As the community’s leading medical spa, it is exciting for us to be recognized on both a local and national level,” says Margaret Mitchell, President and Founder of Epi Center MedSpa. “We are thrilled to receive these awards and look forward to continuing our dedication to youthful skin and personalized patient care.”

Top Medical Spa honors a facility that offers a true day-spa experience along with medical skincare services to a high percentage of repeat clients.

The spa is led by founding physician Patrick Bitter, M.D.

Clients’ nerves are calmed while awaiting treatments in relaxation that are dressed in muted tones and illuminated by candlelight or a cozy fireplace. “We created a modern spa,” says Margaret Mitchell, president and founder. “But it has the authoritative oversight of a doctor who is also serious about safe and responsible medicine.”

A Breath of Fresh Air 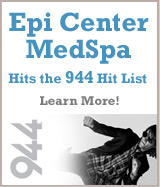 The magazine named the Epi Center MedSpa in San Francisco the “Greenest Spa,” noting its role as a vanguard in the movement to “green” beauty.

SAN FRANCISCO–(BUSINESS WIRE)–San Francisco’s premier lifestyle magazine, 7X7, released its coveted Best Of Issue this month. In this issue the magazine’s editors pick the best the city has to offer and shares its picks with the readers, including the best places to “get groomed and feel pampered.” In this category, the magazine named the Epi Center MedSpa the “Greenest Spa,” noting its role as a vanguard in the movement to “green” beauty.

According to its editors, “Beauty is the new green frontier, and Epi Center MedSpa is in the vanguard, with its organic line of skin-care products and makeup, nontoxic light-based photofacials and more-traditional cleansing treatments that use DermaSweep, a type of particle-free microdermabrasion that’s less invasive (as well as better for the practitioners) than its conventional counterpart. This spring, the decade-old spa also moved into its newly expanded eco-chic digs near Union Square—complete with calming blues, earthy browns and the sounds of trickling waterfalls—and became LEED certified to boot.”

The Epi Center MedSpa is the nation’s original medical spa, and became the nation’s first eco medspa when it opened its doors in April to commemorate both its 10th anniversary and Earth Day. A trendsetter in the skin rejuvenation industry, the office is led by world renowned cosmetic dermatologist Dr. Patrick Bitter Sr. and now combines its beauty enhancing medical procedures with the most effective organic treatments and healthy environment to create a naturally vibrant and youthful appearance with minimal downtime.

The Epi Center MedSpa worked with leaders in eco architecture and design to create an elegant and luxurious LEED certified eco medical office and spa. Eric Corey Freed, founder of organicArchitect and author of Green Building and Remodeling for Dummies, ensured the Epi Center MedSpa conforms to the strict standards established by the U.S. Green Building Council. Justin Martinkovic, principal in the San Francisco commercial and residential architecture firm MartinkovicMilford, served as the lead architect on the project. Eco Fabulous founder and style guru Zem Joaquin served as the “green style police” for the project, ensuring that its design adhered to architect and designer William McDonough’s strict “Cradle to Cradle” standards. Cradle to Cradle means as many aspects of the medspa as possible are designed to follow natural systems to create a building that allows nature and commerce to co-exist in a way that supports the health of the planet.

The Epi Center MedSpa offices are light, elegant and inviting, cultivating San Francisco chic meets eastern simplicity in its design. It is constructed using eco materials, from recycled and FSC-certified wood, marble flooring and countertops, to the eco paints and recycled fabrics in a color palette that reflects those found in San Francisco’s natural environment. The eco medspa’s treatment rooms are named after our local natural treasures, from the Farallon Islands to rare and endangered animals. It is also energy efficient and conserves resources through its lighting, recycling, electronic medical charting, digital photography and water filters that eliminate the need for bottled water.

To learn more about the new Epi Center MedSpa, please go to https://epicentermedspa.com.